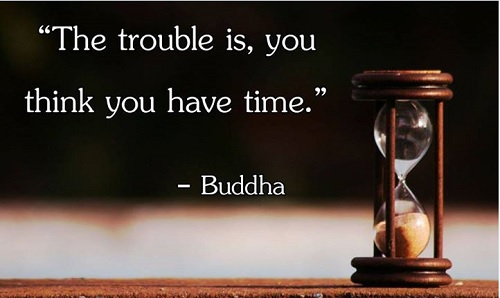 In life, you are either moving forward or backwards. No stand still.

But not all moving backwards is actually bad like people paint it to be.

Atimes, you actually move backwards to learn some things so you can move forward a lot.

I thank God that I have moved forward a lot this year and as I was going to the office this morning, it occurred to me to make a list of the things I have learnt and share it with my subscribers.

I hope you will learn something that will impact your life too from these:

LESSON ONE – Thinking You Have Time Is Dangerous To Your Life:

Earlier this year, I came across a Buddha quote that really lightened me up. The quote says:

“The trouble is, you think you have time”

It reminded me of a time when I was 23. Reaching 30 seemed like a lot of time to me but today, I can see it is not. I heard something from Akin Alabi sometimes ago when he said “TOMORROW is for Losers. Today, right now is what you have.”

Think about it. No one can really control tomorrow.

The only way to control what happens to you has to do with what you do today.

So, what are those things you have been putting off hoping to do them later?

What if there is no later?

Time is what life is made up of. How you use it matters a lot.

Another quote that dealt me a great blow which led me to buy 3 books and study them was from Jim Rohn. The quote says

“First we form habits, then they form us”

The quote dealt me a great blow because I have been studying the lives of people who are successful and they all have similar things that they do.

For instance, a friend of mine who is close to Dr. Sunny Obazu, publisher of Complete Sports told me that if you go to this man’s office by 6:05am, you will meet him there working. If you came there by 5:55am, the office would still be empty.

That is a success based habit he created sometimes ago to push himself to success.

The thing about habits is that once they take over our brains, they are really hard to stop. They sort of compel you and drive you to do things.

That is why a chain-smoker finds it hard to stop smoking even though he says he wants to stop.

Successful people have success habits that they consciously formed and it drives them to success.

People who are failures too have also formed failure habits, mostly unconsciously that is making them failures.

For instance, Successful people usually start their day doing the most important things that will improve their lives. Failures start their days doing zero based activites like watching TV or gisting with friends.

I took a look at my life and listed the failure habits I have and made it a decision to replace them with successful habits and it is paying off a lot. Do the same too. You can get a copy of Stephen Covey’s book titled “7 Habits of Highly Successful People” and read it. It will be of great help.

LESSON THREE – Be BOLD, It pays off big time

There is a greek saying that goes thus – “Fortune favours the bold” – It is TRUE.

Over the past 2 years, I have observed something about people who are hugely successful. They have something that is not taught in any school.

It is about venturing into the unknown and not bothered about what might happen.

Boldness is what makes people leaders. Others just prefer to follow. They are afraid of the unknown and they just do nothing.

You don’t find boldness in average people and that is why they are average.

People who are successful take bold steps. Earlier this year, I paid N1.3m for an advert. That was the first time I would pay that type of money for a single ad.

The ad didn’t really work but it brought something else. It brought me some connections that would be worth millions but the main thing it gave me was GUTS. Now, I know that I am capable of doing much more.

Naturally, I am not a bold person but years ago, I read a quote that says – “Be Bold and unforeseen forces will come to your aid.” – Since then, I just fake boldness and go out to do things I normally won’t do and it is funny how doors just fling open to you when you are bold and the fake boldness actually becomes real.

How do you become bold?

Some people say you can’t if you are not born with it. I disagree.

In the Bible, God told Joshua after Moses death that – “Only be strong and VERY COURAGEOUS” (New American Standard Bible Joshua 1:7) It means it is Joshua’s responsibility to be courageous.

You can actually be very bold when you know that someone is backing you up.

Just start by practising the art of been bold. Start doing the small things you are usually afraid of doing and be consistent with it.

It will pay off. You will begin to make big business decisions, meet powerful people and challenge some stupid beliefs you grew up with that is dragging you down

LESSON FOUR. No Road Is Blocked, There is Always a Way Out

Around November, I was working with a programmer and the application he created was not working
properly. He searched and searched for the bugs but he couldn’t find any.

Finally, he told me he was giving up. “I have searched and I can’t see what is wrong, so I will just refund your money” he said.

I knew he would find a way if he would just settle down and think better. And that is what he did and he found the little bug that was disrupting the application.

This is a big lesson that I learned back in 2007 but it was reinforced this year for me.

There is always a way out no matter how clumsy and confusing a situation looks like.

Stop saying you are cursed and you just can’t find a way out.

Stop saying you can’t start that business because no one will lend you some money.

In Bishop David Oyedepo’s words, “If you can think enough, what you have is enough”

LESSON FIVE: God has better things to do. He won’t take up your responsibilities –

This is a huge one and it will probably offend a lot of very religious people but these are things I learnt. Many people try to solve certain issues in their lives by pushing their responsibilities to God.

Some think if they can fast enough and pray enough, God will just take up what they are supposed to do. Nothing can be further from the truth.

Do your part and let God do His part. For instance, would you pray and fast over a piece of land so that it can miraculously produce cocoa trees and pods?

Of course you won’t but you would often see people doing the same for money without making an effort to start a business.

One that is common is the issue of tithes. People think paying tithes = financial breakthrough but if you look around, you will see millions paying tithes faithfully and struggling financially because they expect the tithes to automatically grow their bank accounts. And there are people who don’t pay Tithes and are doing well financially. God doesn’t confuse people.

Mind you, don’t take this the wrong way. I am not saying you shouldn’t pay your tithes. Of course, you should.

The lesson here is – Do your part and God will do His part.

LESSON SIX: The World Has Changed. Deal With it that Way

A lot of people still think we live in 1960 and they make decisions and live their lives that way.

Man! Look around you. The world has changed.

A lot of things that used to be powerful no longer do.

Also, today, things are faster. The internet and all sorts of advancement in technology made sure of that.

Of course, not everything has changed. The basic laws and principles of the world are still intact. The law of gravity for instance is still there and you won’t reap if you don’t sow.

Another thing you ought to know is that we live in a time when a lot of things have already been done by various people all over the world and you do not need to invent the wheel.

It is really rare to have a brand new idea that has not occurred to someone in Japan, Singapore, New Zealand or
other places.

You can move faster in whatever industry you are just by finding what other people in the same industry have done and improving on it.

This one is crucial. I already said something about it at the beginning of this article but I had to repeat it here in a different way because it is that important.

A study was made in a university in the US. I can’t remember the name of the school now but just grasp the lesson.

The results of the study showed that the salesmen who made $250,000 and above per year were immediate action takers. Whenever they learnt something, they went ahead to put it to work immediately. When they conceived a new idea, they would take action on it fast.

They didn’t sit around over analyzing things.

This year, I have experienced at least 10 rich guys who are not so brilliant but are swift action takers.

When they put together a plan, they take action on it sharp, sharp.

It is the complete opposite of what people who struggle do.

People who struggle learn something that could be useful. Then they sit around all day, overanalyzing and looking for all sort of reasons why the

At the end of the day, the whole thing cools down and they end up doing nothing. Then they get another exciting idea and start the same thing all over again.

The good thing about taking action is this – Let’s say you go for a seminar on how to increase sales in your business and you learn about a new concept to improve your sales.

That stuff you learnt at the seminar is just about 15% of the knowledge but If you go ahead and attempt to use it by taking action, your understanding will exponentially jump up to over 50%.

Taking swift action is ONE consistent habit of any successful people no matter where they are in the world.

Start cultivating this habit as next year approaches. Believe me, your life will improve a lot.

If yes, then here is something better

“How to Turn Yourself Into a Live Breathing Money Making Machine”

Right now, I am giving away the first 30 pages of this book for FREE

But that is not all…

I am also giving away 3 extra books for free

REPORT #1: 201 Sales and Marketing Lessons I Have Learnt in 10 Years

REPORT #2: How to Turn Yourself Into an “Exceptional Selling Machine

REPORT #3: 21 Reasons Why You’re Not Yet A Millionaire & What To Do About Them (Akin Alabi)

I believe these books will help anyone who reads them

I guess that is it for now.

There are other things I learnt this year but those 7 are the top ones.

Work on them. You will see the difference.